A Guild in the online game: The Kingdom of Drakkar 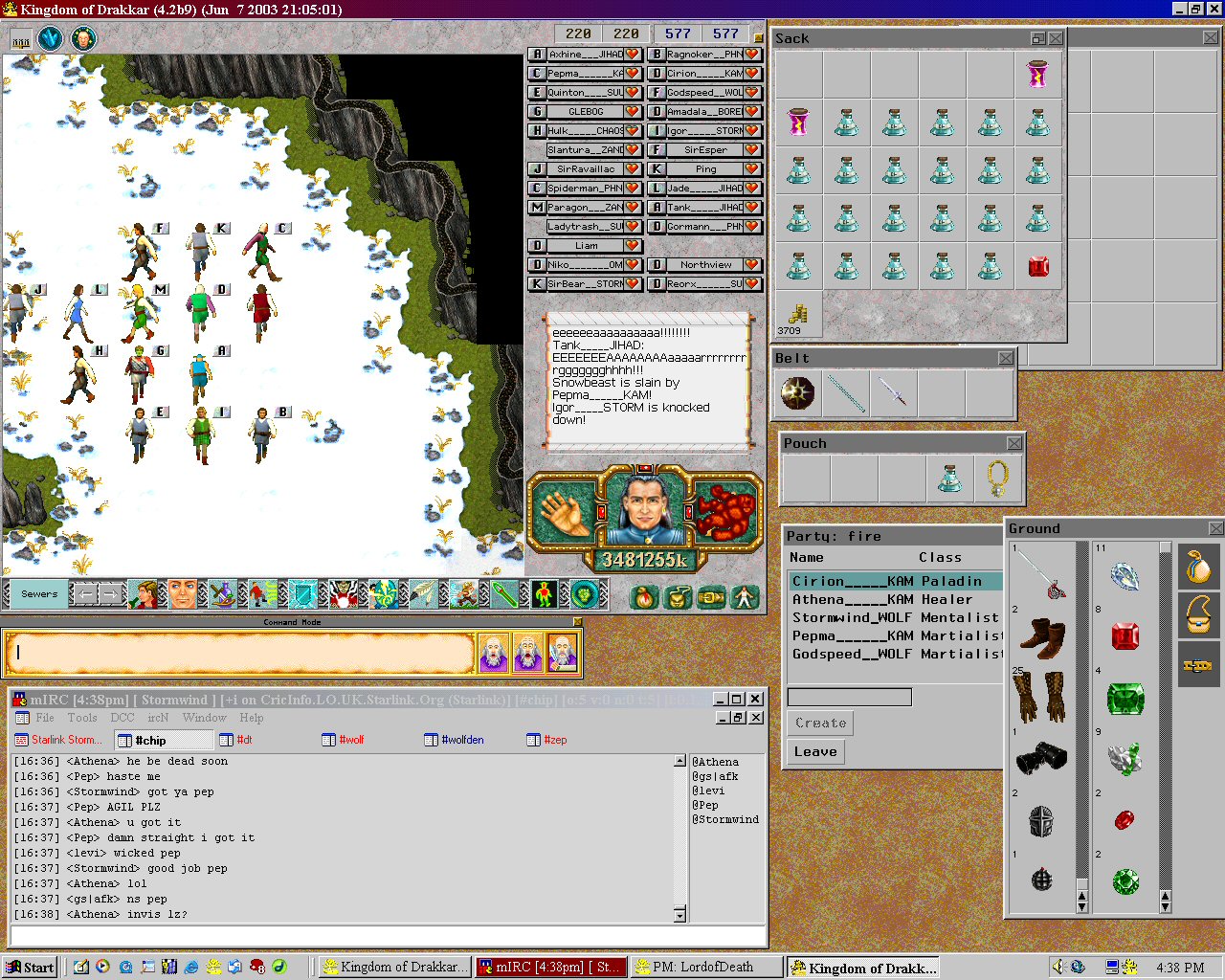 WOLF vs. The Snowbeast

The mighty Snowbeast. This was a special event hosted by one of the Sysops of Drakkar – I believe it was Flisk. He is the player named GLEBOG on the screen. Defeating this over-powered version of the Snowbeast took over 25 players. 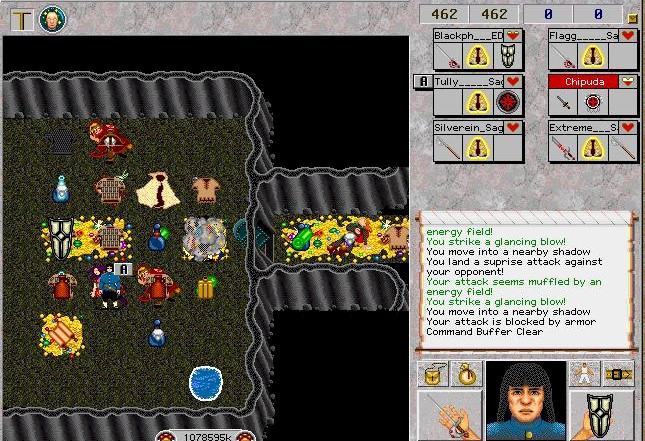 An older screenshot I had from back when I was a member of EDGE. This is the EDGE and SAGE guilds (who eventually merged) battling Chipuda (also known as Chipper) who was one of the Four from Frore. A mighty Mentalist with a powerful staff that can permanently stealth health points from your character. 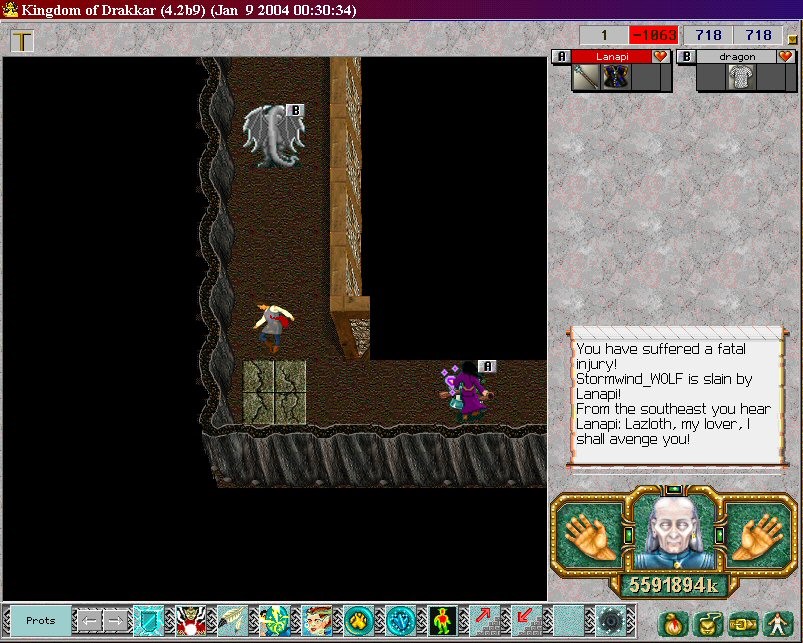 To get access to Lanapi’s lair, you have to first beat Lazloth, the super-thief from Cobrahn who can one-shot players.

i went to take a look after the team got past Laz, and well… Lanapi likes to teleport out of her house… 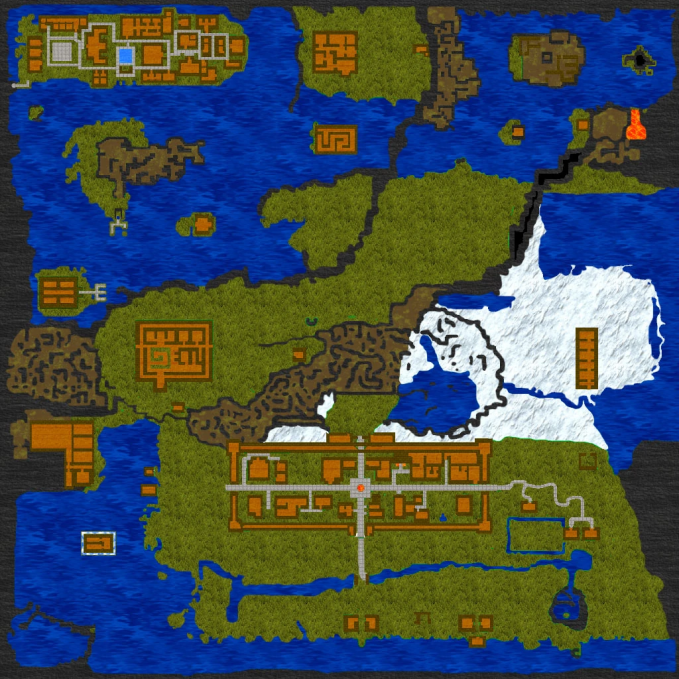 One of the original drawings of the Norken Realm (Nork, Maeling, City-State of Frore). This was painstakingly assembled by a player. 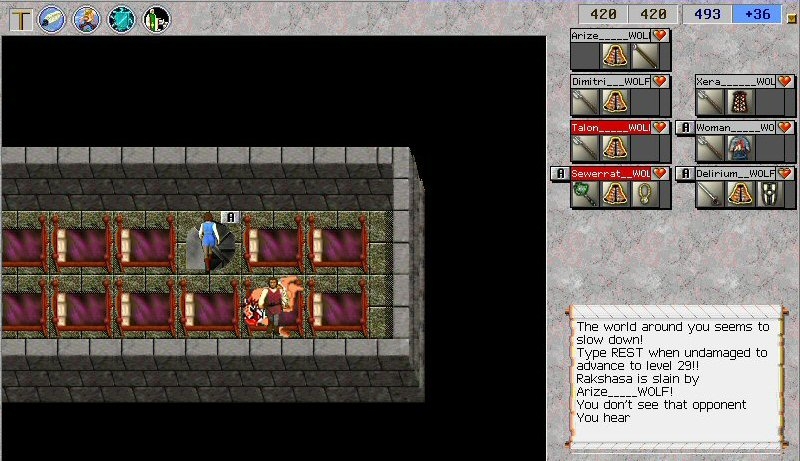 Reggie is the nickname of the Super-Rakshasa that can be found in a secret area of the Nork Dungeon down on floor 7. His cloak is highly reflective against hostile disciplines cast against you. 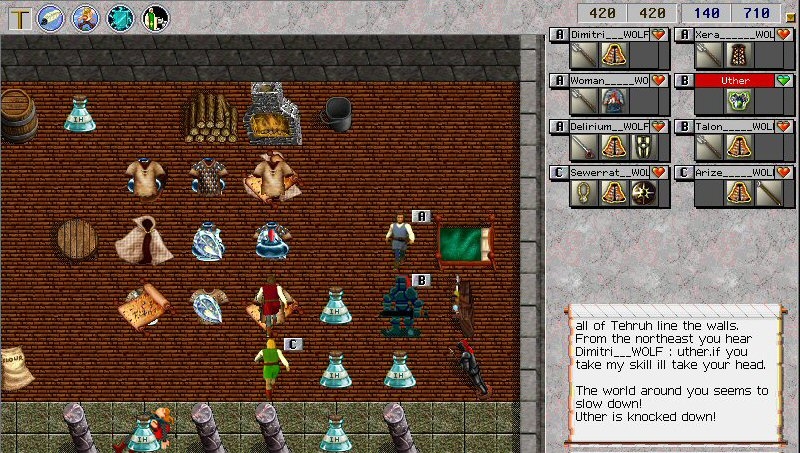 Uther is one of the famous Four from Frore. A mighty paladin whose mission was to defend Frore from the nigh-invincible Snowbeast. In his search for the power to defeat the Snowbeast, Uther discovered a cursed broadsword which turned him to the darkness. This terrible weapon will drain the very life force from those it strikes and makes defeating him a dangerous proposition.

History of the WOLF Guild

The original members of WOLF came from the KLRZ Guild and the MoY Guild in the early days of IEN. They formed a new guild called SV (The Shadow Vipers). Those members were Firehawk, Darkblade, Godspeed, Liza, Rosament, Warlord, Mystery, and Vanfanel. The guild grew to an active roster of 20+ members.

However, an internal dispute led to some members of SV leaving and forming a new guild… WOLF. The founding members of WOLF are Godspeed, Darkblade, Hera, Liza, Rosament, and Warlord. After WOLF was created, its ranks swelled considerably. WOLF reputedly had over 35+ active members at the height of its glory. The WOLF channel in IRC was the place to be for anyone who wanted to party up for some skilling or lair killing.

Time went by however and many of the members’ personal lives reared up and took them away from the game. The guild began to shrink, and then the leaders of WOLF (Darkblade and Godspeed) also had to take an absence for personal reasons. WOLF sputtered on for a time, the bonds of friendship holding the guild together.

Then, in the summer of 2002 WOLF was approached by several players who were looking to form a guild of their own. WOLF needed new blood and the new players were enthusiastic and fresh and eager to make something of themselves and their guild. An agreement was reached and the new guild (we didn’t have a name yet) merged with WOLF. Darkblade and Godspeed were virtually inactive and did not foresee being able to come back to active status anytime soon, so they passed tag rights onto Stormwind. Godspeed has managed to return occasionally and stink up the den. Sadly Darkblade has yet to return.

Since then, WOLF has slowly grown in numbers and in power. As with any guild, our ranks ebb and flow as people’s personal lives take them away or sweep them back, but we have managed to survive where larger and more powerful guilds have folded completely. We have some grudging respect amongst the population and we do our best to advance on our own steam. It is sometimes a painful and amusing journey, but always worthwhile with our good friends.

In March of 2005, WOLF was dealt a devastating blow. Arize_WOLF (Warlord), beloved husband of Xera (Rosament), founding member of WOLF, and a great friend passed away. We shall always remember you buddy and you are missed terribly.